The future looks bright for an Uber manager, thinking of all the fully-autonomous  vehicles that will roll through our streets in a couple of years. If you need a car you just fire up your Uber app, and a couple of minutes later you will get in a self-driving Uber car. No need anymore for Uber to sign up new drivers and make sure that always enough of them are on the street. Automatic algorithms can simply dispatch autonomous cars on the streets, depending on actual and expected demand. And all 160,000-something drivers of Uber can slowly be replaced with a safe and smart “robot car” … Everyone is happy! 🙂

As soon as all technological and regulatory challenges are met to have the fully-autonomous car ready for sale, Uber just hast to make sure to get enough cars for their business. So far, it looked like as they had already identified a potential partner – Tesla. Steve Juvertson, a Tesla board member, is pretty sure that Uber is going to fill Tesla’s order books:

“Travis [Kalanick  – CEO of Uber] recently told me that in 2020, if Telsas are autonomous, he’d want to buy all of them. He said all 500,000 of estimated 2020 production, I’d want them all,” Jurvetson said. “But he couldn’t get a return call from Elon [Musk – CEO of Tesla].”
[…]
“I’m not saying you’re all going to have robocars. But, for those of us who have a chance to be in one, there’ll be one of those epiphanies. You’ll never go back.”
Uber will buy all the self-driving cars that Tesla can build in 2020

However, it seems that Uber is not only relying on Tesla or other OEMs to build the car for them. Recently Uber has invested in a couple of areas that indicate their potential interest to build their own self-driving cars. First, Uber set up shop close to the Carnegie Mellon University’s robotics center in Pittsburgh, USA, in January 2015. From there they went on a hiring spree to get more than 50 people of the top staff from the robotics center for their newly set up subsidiary.

“They took all the guys that were working on vehicle autonomy — basically whole groups, whole teams of developers, commercialization specialists, all the guys that find grants and who were bringing the intellectual property,” recalls a person who was there during the departures. “These guys, they took everybody.”
Uber gutted Carnegie Mellon’s top robotics lab to build self-driving cars 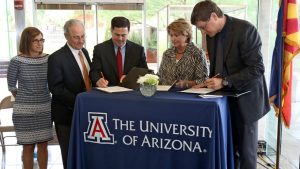 Gov. Doug Ducey, third left, signs an agreement with University of Arizona President Ann Weaver, second right, and Brian McClendon, the vice president for Uber which will allow them to the test and do research on driverless technology in the Tucson area. (A.E. Araiza/Arizona Daily Star via AP)

Later on, Uber and Carnegie Mellon University announced that they will form a strategic partnership, with “focus on the development of key long-term technologies that advance Uber’s mission of bringing safe, reliable transportation to everyone, everywhere”.

This was not the last new development, though. In August 2015, Uber announced that it will partner with University of Arizona for self-driving car research.

Uber has signed a partnership with the University of Arizona focused on research and development in the optics space for mapping and safety. We’ll work with some of the world’s leading experts in lens design at the University to improve the imagery we capture and use to build out mapping and safety features. As part of this partnership, Uber will also be donating to U of A’s College of Optical Sciences — supporting the next generation of optical scientists and engineers as they make new exciting breakthroughs.
Driving Innovation In Arizona

I am not convinced that we will see a self-produced Uber car on the road, though. There would be much more invest needed in order to get to be able to produce a working car than just forming strategic partnerships and investing in knowledge. The necessary asset invest would be huge as well, completely going against the current Uber model. However, it is a good way for Uber to keep all strategic options open. They could, for example, partner with an existing OEM sometime in the future and add additional engineering capabilities to make sure to get exactly the right car for their future “driver-less” business model.